Ad Hoc is sending a contingent of ten people to this year’s Code for America Summit, which is focused on four major themes: digital capability in government, what it looks like when government starts to design policy with tech at the table, the state of the government technology market, and citizen engagement.

We’re a sponsor again this year, so look for Greg Gershman, Paul Smith, Kaitlin Devine, Laura Ellena, Mickin Sahni, Caitlin Weber, Danny Chapman, Cat Greim, and Nikki Carelock at our booth or out and about. Here’s some of the talks we’re excited about:

This afternoon workshop, held the day before the official open of the Summit, is part of the “Buying Better Results” theme, paired with the morning workshop run by 18F called “A Better Way to Buy IT: Lessons in Modular Contracting”.

Representing the view from the vendor front is Ad Hoc co-founder and CTO Paul Smith and Director of Innovation Kaitlin Devine. They’ll be joined by Zach Berke of Exygy, and Mark Ferlatte and Nic Wissman of Truss. Here’s how Code for America describes the session:

Years after the launch and rescue of Healthcare.gov, a number of vendors have sprung up to serve government technology needs. This workshop, run by three companies with a significant number of employees and revenue from federal government clients, will cover the strategies, approaches, and lessons learned that can help governments from municipal all the way to federal deliver simpler, clearer, faster technology that meets user needs.

On Thursday, day one, 11AM on the Main Stage, Ad Hoc co-founder and CEO Greg Gershman will join Rafael Lopez of Accenture, Marquis Carbrera of IBM, and Dan Hon, CfA Summit Co-Chair. Here’s the setup:

Three years after the launch of Healthcare.gov, the market for government IT and other services continues to evolve to meet the needs of a digital age. What do we learn from new models and partnerships, especially from how traditional vendors and a new breed of startups are working together? What still needs to happen to build a system that works for government, for the vendors, and most importantly, for the American public? A candid conversation about what's working, what's not, and a reminder of what's at stake.

From Policy to Delivery: Implementing the Largest Modern Change to Medicare

In the first of the afternoon breakout Thursday sessions, Ad Hoc Designer Caitlin Weber and Product Manager Mickin Sahni, along with Natalie Kates and David Koh of US Digital Service, Yadira Sanchez of Centers for Medicare & Medicaid Services and Mari Miyachi and Ivana Ng of Nava Public Benefit Corporation will discuss how policy making is intertwined with tech implementation in the federal government. Here’s the full description:

What does it mean to govern well in a digital age? The movement of the past few years to bring digital practices into government has moved past just tech and into delivery-driven policy. For the Medicare Quality Payment Program, delivery-driven policy drove a complete evolution of product development at the Centers for Medicare and Medicaid Services from contract award to production release. This track shares real-world examples of delivery-driven policy in action today and seeks to inspire the next stories of true 21st century government.

This session will center, in part, on the Quality Payment Program Front End Development Services project.

The Good, The Bad, & The Ugly: Best practices and pitfalls as a government contractor

As modern software development finds its footing in the government contracting sphere, we're seeing the value of current technology being utilized to address previously intractable problems. As gratifying as it is, working with government agencies and contractors has unique challenges, but we're navigating them and so can you! Join us to learn about the best practices, dangers, and impact of modernizing government software.

We’re hosting a Happy Hour at The Trappist, 460 8th Street, which is three blocks from the Summit, from 8 to midnight on Thursday, the first full night of the Summit. All are welcome. If you’re doing something early, come late. If you’re doing something late, come early. This is an open bar event. There will be separate tabs available for government employees at the Front Bar. Here’s a visual: 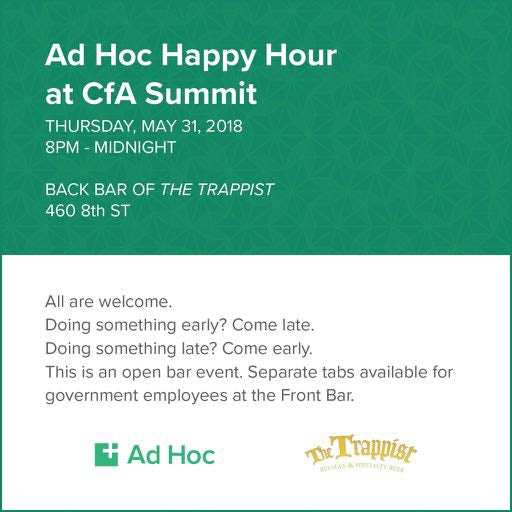 Looking forward to the week!

Ad Hoc CEO and co-founder Greg Gershman will speak today at a session called, HealthCare.gov: From Disaster to Operational Success.

A phased approach to modular contracting

Using multiple, small contracts does not necessarily guarantee this result, but you can build better products and get better at incorporating new information as you go.